Pedal Current Draw is a Lie 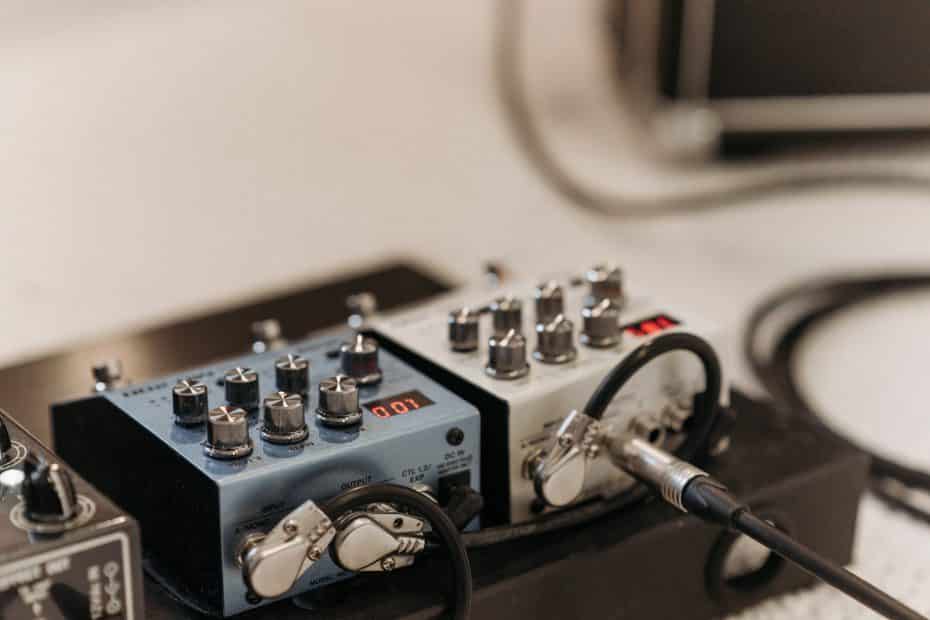 Guitar pedals, and other DC powered devices that we use in our rigs often reference a current draw number. Your delay pedal may say something like, ‘9VDC 300mA center pin negative’ We’ve covered voltage and polarity here before and they are straightforward concepts, but that mA number printed on the side next to the power jack: Well, it’s wrong. OK, wrong may be a little strong. Maybe incomplete, or over-simplified is more helpful. The key is that current flow in a device cannot be accurately represented in a single number because it changes.

With a simple analog guitar pedal, the amount of change is often small enough to be inconsequential. When you engage the pedal and the LED lights, a little more power is used and a little more current flows, usually not a big deal. In complex digital devices though, like modelers and multi-effects with color displays, RGB LED’s, wireless interfaces, etc, the changes can be much more significant. Measuring the current can be tricky, because it changes over time. In some cases, the time we are talking about is short, certainly much shorter than you can measure with the average handheld multi-meter. I’ve seen plenty of videos and posts with users measuring the current draw of a device as single number and concluding a power supply with that rating is sufficient, but this is missing key pieces of the story. Proper measurement of power characteristics over time usually requires sophisticated and expensive power analyzers.

Here is a measured power trace from a popular multi-effect unit. Notice the blue line indicating current. See the big jump at the beginning? It shows about 1.7A peak but only for a few tens of milliseconds. This is in-rush current. Most electronic devices use capacitors for filtering and smoothing of power supplies. Roughly speaking, bigger capacitors provide more smoothing. But the capacitors are like little batteries, and they take time to charge up. When you first switch the device on, the capacitors are discharged. They draw more power at first to charge up. There is also more going on such as thermal performance, overshoot and other complex behaviors that contribute to in-rush.

Bear in mind that there will be in rush current on both the power supply and the load (this chart is just measuring the load). And each device will have its own inrush. This is partly why it can be helpful to turn on a power supply first and then the load. In large power systems, startup of devices is often sequenced to avoid excessive in-rush causing problems such as tripping protection mechanisms.

After the in-rush, the current drops and then changes a few times. This is going to be things like enabling certain IC’s, reading from flash, changing display brightness etc. Everything necessary to start up this complex device. Finally, we see the current reach a steady state around 700mA. This all happens over about 20 seconds. If we measure the current with a multi-meter at this point it’ll show a current draw of 700mA. Can we now say that the current draw of this device is 700mA? What about the 1.7A in-rush at the beginning? What if we turn on more LED’s or turn up the display brightness?

Components have a tolerance. For the aforementioned capacitors it can often be 20%, and that assumes new parts at a particular temperature. If we were to measure another device of the same make and model as the previous one, the data may be different. They will also change over time as certain parts get older and go out of spec. If we have a power supply that is right on the edge of the specification, it may work for your device, but not for mine. Maybe it will work in an air conditioned room, but not outside on a hot day.

Now we start to see the challenge. If we are the pedal manufacturer, what current number do we state for a recommended power supply? If we take measured in-rush at 1.7A and then add some headroom for tolerance, temperature and age, and perhaps a bit extra to be safe, maybe we say 3A? There’s the delta between the dude on the internet saying current draw is 700mA, and a manufacturer recommending a 3000mA supply. The numbers are both wrong. It changes.

OK, fine, but I have a power supply rated at 1A and it works great powering this device, how can that be if there’s 1.7A in-rush? Well, it’s the same problem, isn’t it? That 1A number on the power supply is also wrong.

Let us now put ourselves in the shoes of the power supply manufacturer. Our power supply can happily provide 1000mA at 9V for days, or weeks at a time. We may call this 1000mA continuous. We have also tested a higher current for a shorter period of time, say 3000mA for 1000mS. We may call this intermittent. Thus, our power supply works with our target device, but which number do we put on the label, 1000mA or 3000mA? If we put 3000mA, our customer may think that they can now connect a 3000mA continuous load. What happens if they do that? Maybe it gets too hot or trips a protection mechanism and fails. Not a good user experience.

Industrial power supplies will often have labels that include continuous and intermittent ratings and have datasheets with pages and pages of specifications and graphs for different conditions and limits such as de-rating curves that indicate how power can be delivered according to temperature. Here’s a nice article on power supply thermal de-rating . The single current draw figure on the side of your guitar pedal is missing this data: It’s a guideline number only. We usually don’t know how it was derived. It may be a steady state number with typical settings, an average, or a worse-case scenario plus some extra for headroom just in case. The solution maybe for effects pedal and power supply manufacturers to provide detailed datasheets like the industrial power supplies, but do most guitar players really want to wade through all that before plugging in and playing? How much of it would make sense to the average user anyway?

Let me let you into a little secret. The reason most manufacturers recommend that you use their included power supply has zero to do with them making money selling wall-warts! It’s that they tested with this power supply, and they know that it works. You may use another power supply that appears to be compatible, because it has the same mA printed on the side, but it may not work and you’ll be disappointed, and they’ll have a tech support issue, or even a warranty issue if the power supply damages the device.

When you are choosing a power supply for a guitar effects pedal or similar device, make sure it can provide the exact voltage that you need, and that the connector is the correct size and polarity, or use a suitable adapter. A good rule of thumb is to use a power supply with a current rating of 2 -3 times that of the continuous steady state current. If the guitar effect uses 9W (1A at 9V) in normal usage, then a power supply rated at 2 – 3A will usually be a good choice. You could go more, such as a 5A or 10A rated supply and the load will only draw what it needs, but if you go too far over, the power supply will not operate as efficiently, and you’ll waste a bit of energy. Also higher current rated supplies will often be larger and more expensive.

Note that this information is primarily centered around guitar effects pedals and similar small devices. Some loads such as class AB tube amplifiers may have much wider ranges of power use. Many non audio applications such electric motors, heating appliances etc, may have wider ranges still and using the manufacturers recommended supply is important in these cases.

In summary, if you are looking to replace the power supply for your effects pedal, use the current draw number as a guideline only. Find a good quality power supply rated at 2 – 3 times the actual current draw of the device during normal usage and test it. Keep in mind that the pedal manufacturer may not warrant the device if you use other power supplies so check with them first if that is important to you. If you are not sure about anything, check with the power supply manufacturer and get their advice.

Need a power supply for your pedal board? Mission 529 power supplies are small and light with modern features such as USB-PD and Li-Ion.